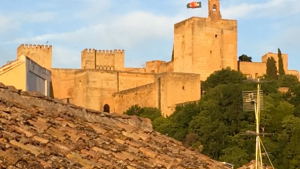 Granda, Spain — The prodigal child has come home to roost. I am in the Albayzín section of Granada. This once autonomous,Andalusian Muslim community, which has retained the narrow streets of its Medieval Moorish past, I’d argue, is ground zero for tomorrow’s world.

It’s all here- the sights, sounds, smells; Syrians, Moroccan, Lebanese, Lybians; the restaurants, Halal food, leather stores up steep walkways; the incense; wild colorful ingredients, spices and herbs. Arabic pushing up against Spanish and other European languages. The mosque and the church, Jewish history. Young women offer henna, which comes from the Arabic, ḥinnāʾ, for 1 Euro; men smoking their cigarettes stand in front of their shops. There are tea and hookah lounges. There’s flamenco, too, where it originates (as well as in Extremadura and Murcia) — a doleful synthesis of Romani, Arabic, and Spanish cultures that eventually find their way to the New World and metamorphose into el tango.