for Ronni and her students at George Washington High School, “the Heights,” NY

for Mahnaz, who wants to know about Edward Said

and for the late Edward Said, who inspires 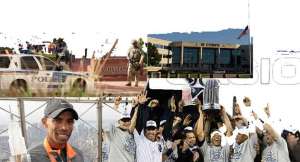 The morning after the New York Yankees’ historic 27th World Series win over the Philadelphia Phillies I received another email from my great friend, Ronni. She is the principal at the High School for Media and Communications, located on the first floor of the huge and beautiful George Washington High School, a public high school located in the Fort George neighborhood of the Washington Heights section of Manhattan in New York City, New York. Ronni writes that, “The kids told me that after the game they went down from their apartments onto the street to cheer and hug and set off firecrackers — don’t you love a neighborhood –“.  Toilet paper — “the working man’s decoration,” Ronni calls it — hung from trees and street lights all over Washington Heights. She could hear the voices in the hallways of her high school filled with Dominican Pride (she wrote this just like I have it here) for Alex and Cano, and, yes, Pedro, too.

What Ronni experienced the morning after the Yankee victory is a celebration of arrival — Dominicans have arrived. This is Washington Heights, it’s homes, schools and wonderful restaurants and stores, all truly an acknowledgment that America is vital and different. Not but different, and. A new order is in store for us and we must pay attention, acknowledge it and name it, as Julia Alvarez, our “mother-sister” has, as Junot Díaz follows — the narratives of assimilation and change and identity. All this is Washington Heights, a warm, happening place, full of life and possibilities. Washington Heights is undeniably tomorrow.

Washington Heights School kids — and kids in Iowa and Colorado, Texas and Wyoming — heard an accented English on national television — their English. Hideki Matsui even used a translator during his post-game interview, after receiving M.V.P. honors. The hallways of George Washington High School were filled with the pride of citizenship defined by a wide-ranging diversity. This is America. It’s befitting and telling that this victory was won in New York, a city less of the United States, but more a city of the world — perhaps even the capital of the world. The morning after the Yankee victory, President Obama said that the world was back in balance because the Yankees had once again won the series. The statement befits New York, home of the Chrysler Building, the Empire State Building and the memories of the World Trade Centers, re-captured during the 6th game by the Navy brass — they’d christened the USS New York made from parts from the Centers — sitting behind home plate alongside Mayor Bloomberg who had just narrowly (51%) won re-election (New Yorkers were not happy with his aggressive altering of the mayor’s term limits — democracy speaks). Baseball is about redemption, going home; it is inclusive, the future, which takes time and careful understanding to reach.

The original George Washington High School, which was operated by the New York City Department of Education, was built February 2, 1917. The school’s name derives from the Revolutionary War battle fought on the hill of the building site. The school was once an annex of Morris High School. George Washington High School was built and opened in 1919, and then moved into the current building at 549 Audubon Avenue in 1925. George Washington High School has had notable graduates — Jacob Javits, Maria Callas, Henry Kissinger, Alan Greenspan, Harry Belafonte, and, yes, Manny Ramírez, who did not graduate. Ronni’s office window opens to their famed and glorious baseball field harking dreams of future glory, and the Hudson River — the beautiful crossroads of the American experience always and forever evolving and redefining America in “the Heights.” Jews, Gentiles, Muslims, Caribbean, Black and White – the history of George Washington High School is the history of America and its metamorphosis into a place of hope at the northern edge of Manhattan. It reads like something Aaron Copland would have composed, full of the color of deep valleys and mountain tops reaching for the heavens. Washington Heights, history and the future unknown living side-by-side.

Citizenship evolves from hope. Citizenship is directly proportional to how open and tolerant a society is to difference. This is profoundly a definition of justice where, according to Noble Laureate Amartya Sen in The Idea of Justice,”human lives are then seen inclusively, taking note of the substantive freedoms that people enjoy, rather than ignoring everything other than the pleasures or utilities they end up having.” This, after all, is what we mean by diversity — tolerance for the Other that is not like us yet also completes us. This is the challenge of citizenship in the “new America” currently undergoing massive changes, a transcendence from a world power fixated on size and speed, to perhaps a more subtle nation that is more reflective, more inquisitive, and a bit more eager to open avenues for dialog where none have existed before. This is the hope.

It’s surprising, then, to read about the confusion that followed Mebrahtom Keflezighi’s New York City Marathon. “Should Keflezighi’s triumph count as an American victory?” asks Gina Kolata, writing for The New York Times. Mebrahthom, Meb he’s called, immigrated to the United States, from Eritrea, at the age of 2. He has been in the United States for 22 years and has completed his education here. How does one prove his or her “Americanness”? “The debate reveals what some academics say are common assumptions and stereotypes about race and sports and athletic achievement in the United States,” Kolata tells us. “Its dimensions, they add, go beyond the particulars of Keflezighi and bear on undercurrents of nationalism and racism that are not often voiced.” This is the American fear — the unstoppable nature of the changing face — and color — of America. On the one hand, we’ve invited the poor, the disenfranchised –“Give me your tired, your poor,Your huddled masses yearning to breathe free, The wretched refuse of your teeming shore. Send these, the homeless, tempest-tost to me, I lift my lamp beside the golden door!”–but on the other end we’ve been involved in violent disorder against these same tired masses for at least a few centuries. The Americas were founded on violent disorder, in fact.

The American notion of citizenship has to first acknowledge this painful reality — we invite and harm simultaneously; we also reap the benefits of immigration, as we see in the graduates of George Washington High School. New York City is the testament that what has founded this country is an international community. “Restless, turbulent, unceasingly various, energetic, unsettling, resistant, and absorptive, New York today is what Paris was a hundred years ago, the capital of our time,” writes the late, great Edward Said in “Criticism and Exile.” “It may seem paradoxical and even willful to add that the city’s centrality is due to its eccentricity and the peculiar mix of its attributes, but I think that that is so,” Said continues.

Ronni closed one of her emails, saying, “A good day for Washington Heights — though I heard one of my students was stabbed last night. He’s okay though.” A few days later, we hear of the violence in Fort Hood, Texas, of a man who shot up an office in Orlando, Florida, and the ongoing human tragedies that are Iraq and Afghanistan that bring us to our knees and all we can do is weep. The weight of America’s lack of political imagination — and will — around issues pertaining to education and health care compels us to wonder how we might even begin to address citizenship when citizens’ voices are muffled, our inalienable rights squelched, human needs repressed? This, too, is America in this age of transition.

The New York Yankees, a model of capitalism — a capitalist victory — and Mebrahtom, a model of hope and perseverance in a vertical economy, are the crossroads of America’s future. Ronni, who grew up in the Bronx, as I did, though I too am an immigrant, naturalized in 1972, and her students in Washington Heights are the hope we’re looking for. Historically, Edward Said tells us that the “set of urban expatriate narratives has over time acquired an almost canonical status, as have the various museums, schools, universities, concert halls, opera houses, theatres, galleries, and dance companies that have earned New York its considerable status as a sort of permanent theatrical showplace — with, over time, less and less real contact with its earlier immigrant roots.”

The Yankee players, Mebrahtom and the students attending George Washington High School in the “new Heights” are citizens that are forcing us to adjust old to new, difference to the status quo. George Steinbrenner told Yankee manager Joe Gerardi that what would be better than a 27th World Series victory is a 28th. This can’t happen without Alex and Cano and Jeter and Mariano and Jorge and… Tomorrow’s America depends on how we open up the “and.” We can’t exist otherwise.